This was an image prompt. I knew a little about the source material – this is an image of a warrior who struggled to pursue her profession against perceptions of her gender. It gave me an idea of why she might be so angry.

This story isn’t about Cisca, but it is about someone in a similar position.

This image is the work and property of user ‘Josu Herniaz’ on Artstation, and is used here with the artist’s permission.

I forced him back. His sword came at me again, heavy and overpowering. I deflected it with my sword, but it wasn’t enough. I leaned the angle of my shoulder into the blow to glance it off my armor and despite all I had done to divert the force of it, my joint complained, something inside burning painfully.  Now past his sword, I rammed the hilt of my sword into his throat. He went down like a tree, clawing at his throat, and I leaned over, sword poised to strike. His left eye, steel grey, the target of my sword, filled my vision as the target of my strike.

END_OF_DOCUMENT_TOKEN_TO_BE_REPLACED

Prompted by a request to assign professions a mythical animal that suits the role, This beginning of a story was born. It’s the beginning of a strange bond, and there may be more later. This story is still not yet free.

I went to the vault, intending to clear it. The time – lock would engage soon, and we didn’t want anybody getting stuck. The massive wheel was heavy, but spun without resistance, not even a squeak. I pulled the door open,and looked in at a huge red lizard, looking back at me in startlement.

No. That was no lizard. That was a damn dragon. Fire erupted, just a wisp, and I slammed the vault shut, turning the wheel. Hell no. To hell with that. Maybe someone slipped me something and I was hallucinating, but I wasn’t going back in there without backup.

The intercom crackled on. “Officer! Wait!”

That voice. That pitch, that command. I wasn’t used to hearing it plead, but…..”Miss Kerris?”

I’d never heard her say please, either. I spun the wheel and pulled the vault open, coming face to face with …

“Miss Kerris.” I leaned around her to look into the vault, but it was empty.

“Please keep what you saw to yourself.”

“Listen, Officer Grey, if you cause trouble for me, I will make you disappear, just like that. This bank is mine. I built it from nothing, and I will not risk losing it for the life of one human. You will keep my secret, one way or another.”

My mind was reeling, a a corner of it had hidden away from emotion.  It had a plan.  I bottled up thw swirling panic, and let that corner run on autopilot. “It’s just a little surprising, ma’am. You looked pretty fierce.”

She stood a little taller. “I was pretty fierce – looking, wasn’t I? And majestic.”

“Carry on, Grey. I may have use for you later. Stand ready.”

She walked away, strutting a little more than normal, and I sighed in relief. I don’t know what I just stepped in, but it looked like I was okay, for now.  I left my feelings bottled for the moment, to process later; I still had work to finish.

A beeping started up behind me, and I went to look around the vault briefly, before closing it. A row of lights lit up, a series of thunks as the vault locked itself for the night. Maybe the vault was the wrong word. Maybe it was more properly a hoard.

Ms. Kerry -Tasiel Kerry, more appropriately, though her birth certificate said Tasha – went home to her flat, a little extra spring in her step. Noble, he’d called her. Sure, she’d prompted him, but humans just didn’t know how to give compliments. “Pretty,” and “lovely,” as if her pride should be in her appearance. He had complimented her character – ferocity and nobility!

She closed her door behind her, and leaned back against it, allowing herself an undignified little dance of delight as she kicked her heels off, directly onto a shoe rack. It’d been so long since she’d gotten a proper compliment. She would have to reward this man with his silly name. Slate Grey. Might as well call him Grey Grey. Double Grey. She’d think of a better name to embarrass the human with later.

She strode into her bedroom and to the bed strewn with gold coins. She undressed, reveling in the cool air on her skin after the heat outside, and threw herself onto the bed of coins. Reaching over her head, she scooped her fingers through the coins, holding a few aloft. An aureus, a yin yuan, a floren, and a bezin. Not originals, of course, replicas of particular coins she owned, those locked in a safe in their cases, with their certificates. But still gold, most of a purity higher than the original’s standard. Paper money just wasn’t the same. It was so flimsy, you couldn’t feel the value of it. She scooped a handful of coins over her stomach, smiling, sheltered once again with her treasure.

As she luxiated in her gold, she thought back to her compliments. She knew she was letting them influence her, but she didn’t care. She’d let the childish human manipulate her, for now. It felt nice to get real compliments, for once.

The request for this prompt was merely “define this character”. I decided that her outward appearance of strength would not be what defined her.

I peeked through the tent flap and caught a glimpse of movement in the distance. A lookout. I shrank back to wait, then peeked out again. They would not stop me, of course, but neither would they leave me to myself. Finally, the way seemed clear. I rushed into the shelter of trees and darkness to the holy spring, the only place that was mine. Any other would be driven mad to walk here, they said. Perhaps it was true.

I looked into the water and beheld myself, painted in the patterns that marked me as the God-Chosen. I did not feel God-Chosen. Paint stained the water as I touched the surface, and it was like it washed the strangeness out of me. Suddenly I had to be clean. I scooped water, scrubbing the paint away. I rubbed my face and neck until my skin felt raw, and the paint bloomed into the water, carried away by the spring’s flow.

Finally, I saw my face reflected in the moonlight. This young girl, who was she? Not the God-Chosen of a tribe. The elder God-Chosen — my mother — said that the gods spoke to me through the spill of runes from my hands. But did they? My hands felt like a girl’s hands, clumsy and unsure. I heard no voices, and I made no promises as she had done. Perhaps it was for the best. The gods were capricious, and had used false words to toy with her before.

I touched the water as if laying my hand upon a friend’s brow, addressing my words to the reflected moon in the night sky. “My name is not Hesralta God-Chosen. I am Sryilla Tusfelt. I am a girl. And I am lonely.”

“Your mother was not lonely, at your age.” END_OF_DOCUMENT_TOKEN_TO_BE_REPLACED

I looked into the water with a sigh, feeling the chill of the water soaking into my shift. The water adhered the fabric to my skin revealingly, though the ripples on the water distorted my form. I crouched closer to look at my shape in the water. It was artistic, nature. This art was the highest and purest kind, born from the interaction of natural principles. Below my reflection fish swam, venturing closer with my stillness.

And then there were the wings.

END_OF_DOCUMENT_TOKEN_TO_BE_REPLACED

This is the third story in what I call the ‘Soul’ series, based on artwork by Klegs.

“Man, that was great!” Sarah was excited, animated, all the things that set me on edge. But she wasn’t like most people. I knew that she needed to just talk. I was content to listen, and she didn’t take offense.

“It was just me! I mean, the bar was a hole in the wall, but I wasn’t just opening for someone, either. They wanted me! They even applauded!” END_OF_DOCUMENT_TOKEN_TO_BE_REPLACED

A challenge to myself, to write a story for a picture chosen by somebody else.

Eight o’clock. I had n’ left work this late in months. All of the other purchasing agents had quit on me or were detailed to other tasks.  It was just me right now, and I was exhausted. The monorail roared down the track running parallel to the road, the street flashing bright and dark as the windows rushed by.  I didn’t pay it much heed, until it went dark, though.  The streetlights went out, the house lights went out, and I could tell the train wasn’t powering down the rails anymore, only coasting.

I turned around, and looked down the mountainside – I could see so much of the city from here – and I was just in time to see the whole city go dark in patches. The train stopped with a squeal and hiss of hydraulic brakes, and then everything was quiet.  I looked at the train and saw people in the glow of their phones, some pressing against the windows to see outside.  A city-wide blackout. END_OF_DOCUMENT_TOKEN_TO_BE_REPLACED 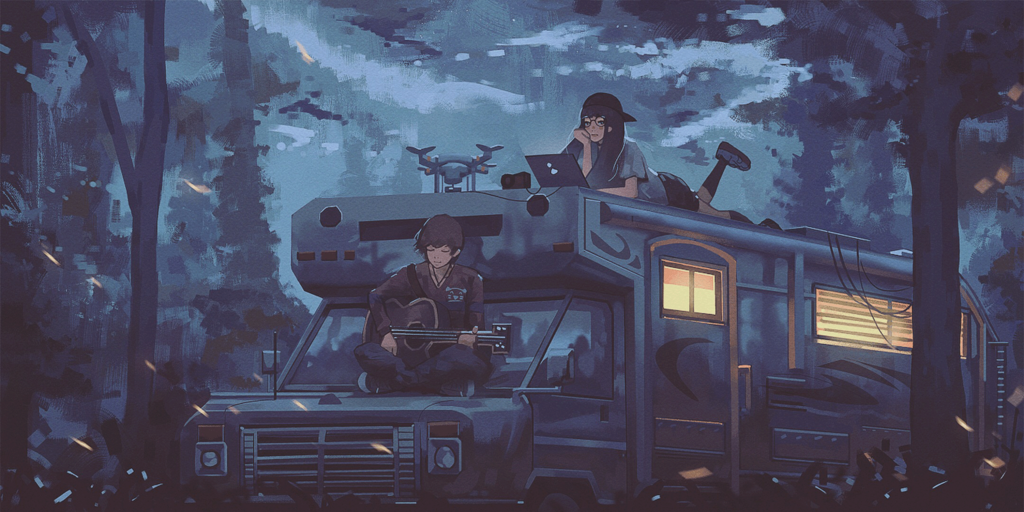 This is the second story in what I call the ‘Soul’ series, based on artwork by Kleg.(DeviantArt)

The RV – and me, laying on top of it – came into sight on the laptop’s screen as I piloted the drone up the hillside.  My fingers danced over the keyboard, angling the camera to keep the RV in view.  I eased the drone into the corridor that the road carved through the forest, and had it shed altitude as it closed in for a landing.  As it settled to the roof beside me, I saw myself through the drone’s camera, shadowed but illuminated by the laptop’s screen.  I smiled to see myself, and I watched my lips twitch into a smile.  I’d never quite get used to that.  I turned onto my side to dismounting the camera from the drone, connecting it to my laptop.  I heard the ping that indicated the footage was downloading. END_OF_DOCUMENT_TOKEN_TO_BE_REPLACED

I frowned over the maps, with my head bowed under the weight of a kingdom. The Mirsken Hain were still pressing my southern borders, hard enough to cost me soldiers and morale, but not hard enough to convince The Nine to take up arms. They worried too much about setting a precedent of bending to the whims of humans. The First thought we could maintain an iron border forever.

In the meantime, my people were paying the price of complacency.  None of the other eight kingdoms were bound to send soldiers to my border if we were not at war, and the crisis was not yet dire enough for me to plead for aid.  But eventually, action would be required.

The Hain had allies protecting almost every border but the one shared with my kingdom, and could devote the full force of their military to a campaign.  I knew that they wanted the southern mountainsides and the diamonds that were being mined there.  They would take almost two hundred square miles of territory to hold the mountains and two hundred more to secure them.  But to reveal their plans I would have to explain how I learned them, and that would put my sister at risk.