If you’ve tried to ride a cat into battle, you should know it doesn’t turn out well. 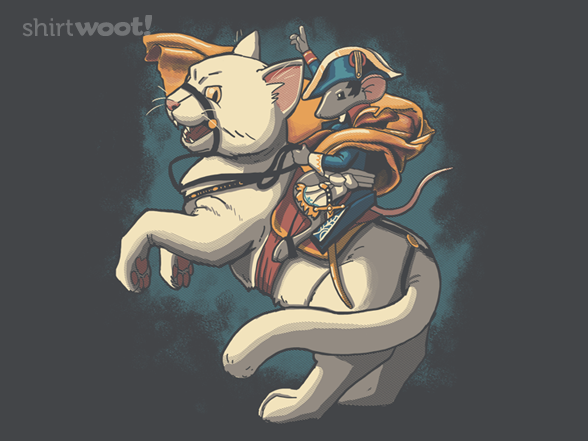 The enemy lined up in the distance. Their snarls and growls made me shiver, the tremble shaking me to the bones. “Steady on,” my mount purred.

I took a breath, calming myself, reaching forward to scratch behind his pointed ears. “Nerves like steel, whiskers like wind.” I repeated the battle mantra, imagining the steel in my bones. It was a pretense, imagining strength where there was none – I knew how easily my bones, tiny in comparison to the enemy, would break. And yet, it worked. I was calmer, and ready.

All around me cats rose to their feet, howling and hissing at the enemy. The enemy barked and growled back, competing for the fear on the battlefield. Our commander rode across the front line, standing atop his mount. I pulled my helmet on, buckling the cheek flaps down behind my whiskers, and hefted the lance another mouse handed up to me. It was heavy, but bracing it in the cup on the back of my saddle, it was manageable, balanced. Sweat dripped into my eye, but with a hand on the reins and a hand on the lance, I couldn’t brush it away.

Then the flag rose up. This is it, this is it, oh hell, this is– Suddenly I was slammed back into my seat. “Hold on, little partner! Battle comes!” My mount practically howled the words. I had a moment to contemplate his battle scars. What mouse had last died on his back? Would he protect me any better?

Then we were on them – and they on us. I remember only flashes from that time. Struggling to reach a dog’s eye with my lance. Jabbing at a vulnerable nose to draw the enemy’s attention, turning his flanks to my comrades.  Blood splashing my chest, and not knowing if it was mine.

That night, we buried our dead, the privilege of the victorious. They were bigger, fast, coordinated, it was true. But they were a pack, and we were a unit. We had a plan. In the end, that was the edge we needed. I heard feet on the ground behind me, and turned, looking up at my mount. I was fully aware that in the normal course of events, I would be prey. “Tigger.”

“Benji.” There was a long, tense silence. “You wonder why my last rider died, and I survived.”

“Mice die. It’s battle.” My gaze was tense though, and I was certain Tigger could smell my tension. No, call it what it was – fear.

“Nibbles was a warrior. He was tough, for someone so small. But when a canine lands directly on your back . . . it’s where the scars on my side came from.”

“Why are you telling me this?”

“I would have died for him. Nearly did, avenging him.” He noticed my surprise, his slotted eyes bearing down on me with predatory intensity. “Yes, I avenged him.”

I remained silent. There was a time for words, but there was a connection here, between me and this predator. Something I sensed might become important, something so tenuous that it might blow away with a hard breath.

“You fought well. You took too many risks, but we’ll work on that. You’re a fighter, and you can trust me, Benji.”

“That’s going to take a while . . . but I won’t turn on you. I have your back, Tigger.” To prove it, I gave him my back, baring myself to his predator’s teeth and claws. I picked up the shovel, and went on digging Marshmallow’s grave. We were partners now . . . I might die if I trusted him, but I’d certainly die if I didn’t.

I'm not real. View all posts by Eric Eshleman