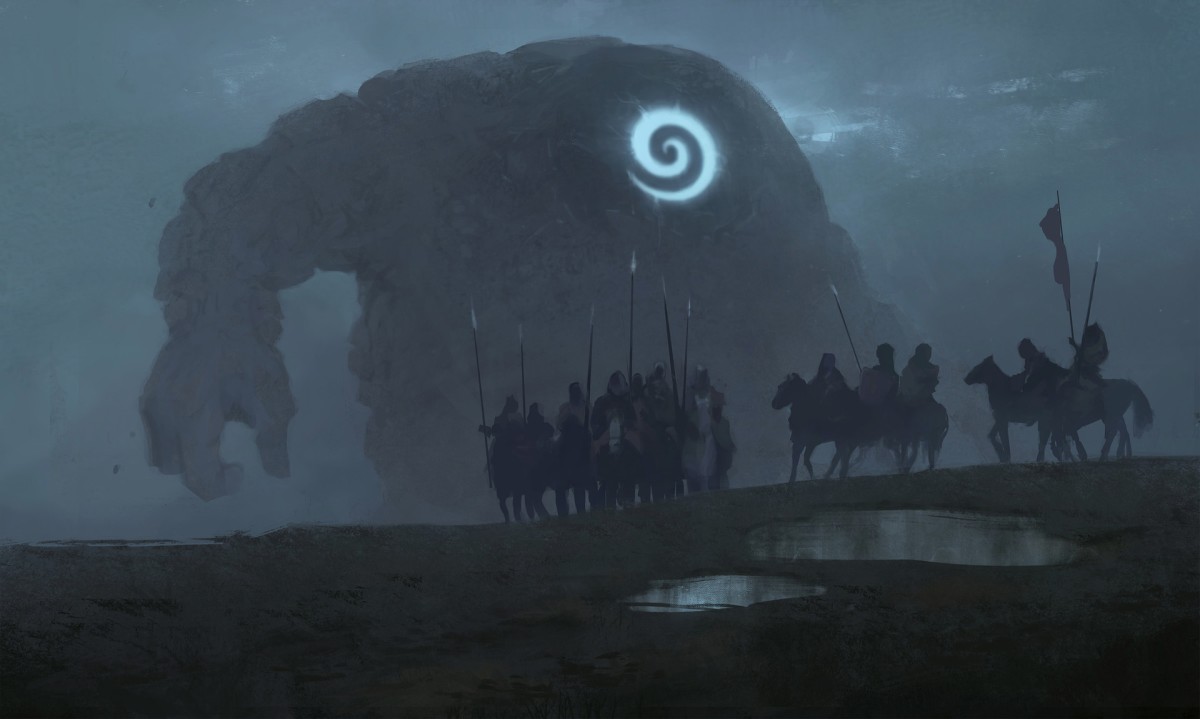 I stared up at the living mountain before us. We rode atop a ridge, and we could look at the spiral emblem on its ‘face’ without craning our necks too far. When we got close, we’d have to climb its body just to attack the top of its toe.

Jamon looked on with me, nodding once. “Yup.”

Looked down at my hands gripping the reins, I noticed the lines in the skin. My sword and armor were clean and well-maintained, but my body would soon begin to rust. No man could fight forever. “And, what was he offering us again?”

“Glory. And a princess each.”

He nodded once more. “And a princess.”

I took a crossbow bolt out of the quiver hanging from my saddle, examining the point. It was made to pierce plate mail, but rock? And even if it penetrated that stone hide completely, I’d barely be giving it a splinter. “Hey, Jamon. Those princesses. You think they were pretty?”

He was quiet for a moment, then he shrugged. “They were okay, as princesses go.”

“The woman watching the stables for her older brother. She had eyes for you, you know.”

Jamon nodded and smiled at the recollection. “She was prettier.”

“I bet I could make headway with Tara. The woman handling the money at the inn.”

At that, Jamon looked at me like I had grown a third head. “She told you she’d smack the gray out of your hair.”

“She meant it affectionately. She was just laying out the ground rules of our relationship.”

“She was telling you that you’d get smacked.”

“I think I have a better chance with her than I have with that walking mountain.”

Jamon just nodded once more. Not even a monosyllable.

“You know, the town needed guardsmen.”

We both just stared at this monstrosity prowling the valley. Nobody lived there. Who would want to? It didn’t do anything but prowl the rocky valley, eating the natural granite. The land wouldn’t even be useful as farmland.

“You know, I’m hungry. Maybe we should make sure we do this on a full stomach. Tomorrow. Or next week. Or in ten years.”

“You wanted to retire in two.”

“I’m pretty sure I can find a way to reconcile those two intentions. Come on. Let’s see if Tara has any more insults to hurl at me while we eat. I bet you can get the girl at the stables–”

I blinked, unaccustomed to interjections from Jamon. She must have made an impression on him. “Brinn. I bet you can get her to share a table, maybe more.”

“What? That’s no kind of bet. Tara’s a tougher customer. She’s going to take time and care. Brinn already has eyes for you. You could probably just wiggle your brows and–”

“Fine. Twenty.” I pulled on the reins, turning my mount back toward town, and Jamon followed along with me. As I rode, I considered the idea of retiring to a quiet life with a spirited woman, and I made my peace with losing that bet.

I'm not real. View all posts by Eric Eshleman